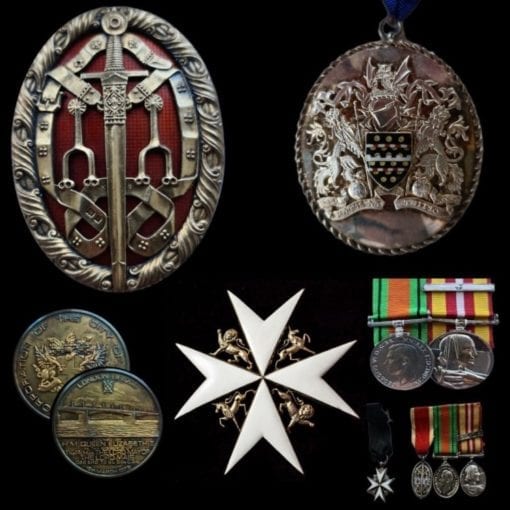 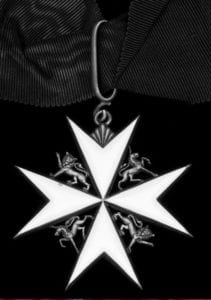 Worshipful Company of Chartered Surveyor silver neck badge by Toye, Kenning and Spencer Founded in 1685, has become the longest running manufacturer of Masonic regalia, as well as regalia for other friendly societies. Inscribed Sir Desmond Heap, Assistant 1977-1983 and Honorary Assistant 1983, Hallmarked with British Lion and marked with an anchor (made in Birmingham) and date marked “g” (1981). The Worshipful Company of Chartered Surveyors is one of the Livery Companies of the City of London. The organisation was granted Letters Patent in May 1977. The Company promotes surveying by awarding scholarships. The medal has the latin Modus ab initio, which is for “Method from the very beginning”

The medals are also accompanied with a Corporation of London – London Bridge Medal, No.4 of a limited issue by Toye, Kenning and Spencer of 2.250, hallmarked silver gilt, the opening of London Bridge by Her Majesty Queen Elizabeth II.

Sir Desmond Heap (17 September 1907 – 27 June 1998) was a British lawyer and expert on town planning law. Infamous for the sale of the old London Bridge.

He was born in Burnley, Lancashire, the son of an architect and surveyor, and attended Burnley Grammar School before studying law at Manchester University.[1]

By 1935, he had been appointed as both Deputy Town Clerk of Leeds, and a lecturer in the law of town and country planning at the Leeds School of Architecture. In 1947, he became Comptroller and City Solicitor of the Corporation of the City of London. He was asked by the Ministry of Town and Country Planning to provide a guidebook to new legislation on town planning then it introduced. The result was the Encyclopedia of Planning Law and Practice, a loose-leaf work which was constantly updated. In his role in the City of London, he was largely responsible for co-ordinating the rebuilding of the area after the Second World War, and for the sale of London Bridge to a company in Arizona. He retired from the post in 1973.

He died at home in Kent at the age of 90. Comptroller and City Solicitor to the Corporation of London (1947-1973) his greatest coup was in 1968, when he was instrumental in selling the old London Bridge for $1.8 million to the McCullouch Oil Corporation in the US. Contrary to popular belief, McCulloch was not under the impression that he was purchasing the Tower Bridge of London!

The Knight Bachelor’s badge The title of Knight Bachelor is the basic rank granted to a man who has been knighted by the monarch but not inducted as a member of one of the organised orders of chivalry; it is a part of the British honours system.

Knights Bachelor are the most ancient sort of British knight (the rank existed during the 13th-century reign of King Henry III), but Knights Bachelor rank below knights of chivalric orders. A man who is knighted is formally addressed as “Sir”.
Until 1926 Knights Bachelor had no insignia which they could wear, but in that year King George V issued a warrant authorising the wearing of a badge on all appropriate occasions by Knights Bachelor; this badge is worn on the left side of the coat or outer garment. Measuring 2 3⁄8 inches (60 mm) in length and 1 3⁄8 inches (35 mm) in width, it is described in heraldic terms as; An oval medallion of vermilion, enclosed by a scroll a cross-hilted sword belted and sheathed, pommel upwards, between two spurs, rowels upwards, the whole set about with the sword belt, all gilt.

In 1974, Queen Elizabeth II issued a further warrant authorising the wearing on appropriate occasions of a neck badge, slightly smaller in size, and in miniature. In 1988 a new certificate of authentication, a knight’s only personal documentation, was designed by the College of Arms

The Order of St John, formally The Most Venerable Order of the Hospital of St. John of Jerusalem (French: l’ordre très vénérable de l’Hôpital de Saint-Jean de Jérusalem) and also known as St John International, is a British royal order of chivalry first constituted in 1888 by royal charter from Queen Victoria.

The Order traces its origins back to the Knights Hospitaller in the Middle Ages, which was later known as the Order of Malta.

The order is found throughout the Commonwealth of Nations, Hong Kong, the Republic of Ireland, and the United States of America, with the worldwide mission “to prevent and relieve sickness and injury, and to act to enhance the health and well-being of people anywhere in the world.”

The order’s approximately 25,000 members, known as confrères, are mostly of the Protestant faith, though those of other Christian denominations or other religions are accepted into the order.

The Order of St John is perhaps best known for the health organisations it founded and continues to run, including St John Ambulance and St John Eye Hospital Group. As with the Order, the memberships and work of these organizations are not constricted by denomination or religion. The Order is a constituent member of the Alliance of the Orders of Saint John of Jerusalem. Its headquarters are in London and it is a registered charity under English law.